Austrian born Dr Rudolf Steiner (1861 – 1925) was an academic and visionary who had wide ranging interests in history, education, agriculture, religion, science, education and the arts.

Alongside editing the Weimar edition of Goethe’s scientific writings, Steiner received a Doctorate in Philosophy and in 1893 published his first major work The Philosophy of Freedom.  From this came the foundations for the school of thought known as Anthroposophy or The Study of Man, which in turn led to Waldorf or Steiner education.  A prolific author and lecturer, there is much written material for perusal in over fifty books and approximately six thousand lectures.  Rudolf Steiner was well known for his educational theories as well as his agricultural and medical ones; in recent times his Biodynamic farm practices have become the gold standard of organic farming.

Anthroposophy, or Spiritual Science, is a way of looking at life from a simultaneously scientific and spiritual point of view, developing spiritual insight and artistic sensitivity, and the ability to work creatively with the results of exact observation and clear thought.

“Receive children in reverence, educate them in love, and let them go forth in freedom.”  Rudolf Steiner.

In 1919, Steiner was requested by the Director of a factory in Stuttgart to set up a school for the children of factory workers.  Steiner did this using his own educational philosophy and innovative methods.

The school was such a success that it was copied and became internationally known.  The name of the factory was the Waldorf Astoria Company, and the schools became known as Waldorf Schools.

The number of Steiner/Waldorf schools has grown to over 1000 in 23 plus countries worldwide.  Here in Australia we have over 90 schools and kindergartens. 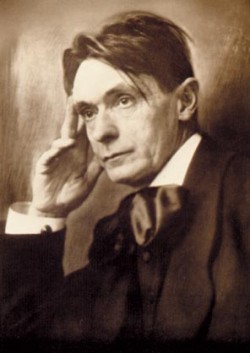 Anthroposophy, or Spiritual Science, is a way of looking at life from a simultaneously scientific and spiritual point of view